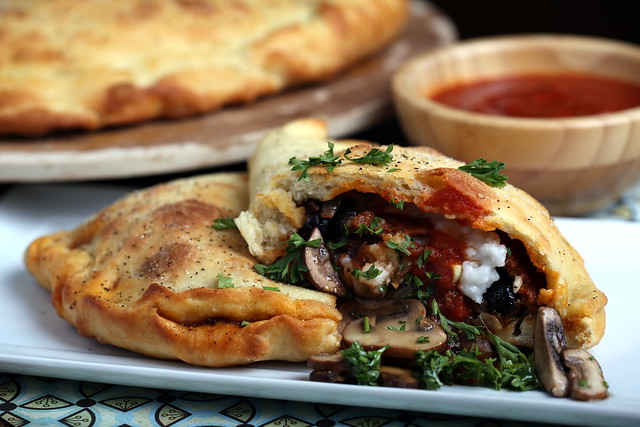 Ever since I discovered “00” flour, I’ve been smitten with the way it produces a perfectly soft and silky dough every single time I use it. So when I came across this fabulous pizza dough recipe that called for “00” flour, I knew I wanted to try it, and decided I’d use it make calzones. After I kneaded the dough, I placed it on top of one of our radiators for about an hour, which allowed it to double in size perfectly.

When I initially formed and stuffed these, they were a bit imperfect and lopsided, but came out of the oven looking really rustic and beautiful. One of the best parts about making these was the aroma that’s emitted during the baking time, which lingered throughout our house through the following morning. (It was kind of nice to wake up once or twice during the early morning hours and inhale a strong and bready aroma each time.)

And these taste fabulous: the rich vegan cheese and sausage kind of melt into the other components here during the baking time, and slicing into it reveals an amazing array of flavors and textures. I was surprised at how easy these were to make, and how close they tasted to the calzones I used to order many years ago at restaurants. Although I used leftover homemade vegan sausage and cheese to stuff these, prepared Field Roast sausage and Daiya or Follow Your Heart cheese would work nicely here as well. 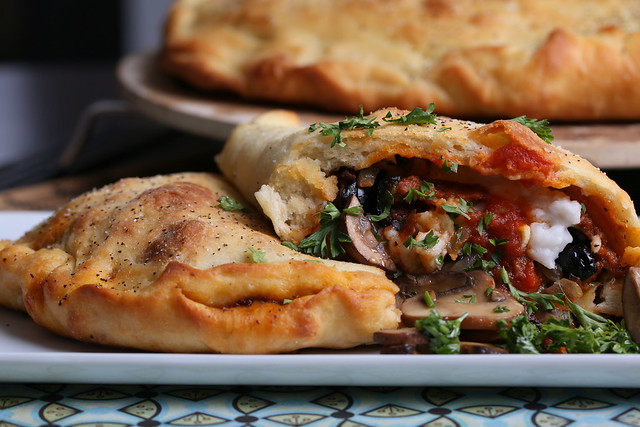 Leave a Reply to Scissors and Spice Cancel reply