You are here: Home / Reviews / Book and Product Reviews / Review of How To Be Vegan, by Elizabeth Castoria

When I first went vegan almost 10 years ago, I was angry. Not just about things like factory farming and cosmetic testing, but also about how no one around me seemed to be even remotely outraged as I was about it. So although I was vegan, I didn’t quite know how to be vegan.

What I learned over the years is that veganism isn’t just about eschewing all animal products (although that’s a big part of it) … it’s also about doing it with a spirit of kindness and grace (which is and should be the driving force behind veganism in the first place). How To Be Vegan (released today by Artisan Books*) by Elizabeth Castoria, former editorial director of VegNews Magazine, is the kind of guide that embodies and embraces the notion that veganism is not only about the choices we make as consumers, but also the choices we make in our behavior and attitudes.

With an entire chapter devoted to manners, aptly titled, “Don’t Be a Jerk,” Castoria guides us on ways to handle vegans who judge other vegans for not being vegan enough, how to be a good vegan host and guest and how to respond to the ubiquitous question, “where do you get your protein?” Castoria’s guide provides answers to all of these and more with remarkably simple logic, offering something valuable to both seasoned and new vegans.

How To Be Vegan is brightly colored, packed with infographics, charts and lists that make things like travelling, dating, fashion, decorating your home and cleaning it simple to navigate and understand. So whether you are considering going vegan, want to understand more about why others go vegan, are struggling with being a new vegan or have been vegan for years, How To Be Vegan is an excellent guide and reminder that veganism isn’t extreme or limiting—it’s quite the opposite with the right attitude and information, which Castoria deftly provides with humor, savvy and grace.

*Many thanks to Artisan Books for kindly sharing a copy of Elizabeth’s book with me! 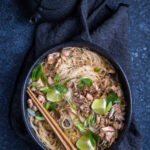