Kissed with a swirl of fatty coconut milk, a pop of lime, a handful of seasoned vegan soy curls and herbs, this vegan version of tom kha gai (Thai chicken coconut soup) is comfort food at its best. Traditional tom kha gai calls for fish sauce, which gives the broth that kick of funk, umami and saltiness that works so well with all of the other flavors. You can certainly use soy sauce in place of it, but you’re not going to get the depth of flavor that fish sauce offers. But does a vegan version of fish sauce even exist?

When I recently attended Expo West in Anaheim earlier in March, I met Zach Grossman, founder of Tofuna Fysh®, a vegan tuna salad product made with jackfruit and organic seaweed, as well as Fysh™ sauce, a vegan, fish-free sauce. He was kind enough to give me a bottle to try and, in this application, it balances out the richness and acidity in the broth perfectly. My vegan tom kha gai will never be the same, and that’s a good thing!

Because I liked the product so much, I asked Zach a few questions about his product, and am sharing our conversation here + offering one lucky reader a chance to win a free bottle of vegan Fysh™ sauce!

How did your idea of making a vegan Fysh™ sauce begin and how has it evolved into a business?

Our vegan Fysh™ sauce actually stemmed off from our original launch product Tofuna Fysh® vegan ‘tuna’ salad. The company, Tofuna Fysh®, was launched in May 2015 (so we’re not even a year old yet!) and in November of 2015 we unveiled the vegan Fysh™ sauce for the first time at Portland VegFest. People were really into it so we decided to film a Kickstarter video and released it the day after to a very positive reception. We actually ended up raising over 240% of our goal!

The story behind the vegan Fysh™ sauce was this (other than the obvious, which is that it fits into the niche we are developing focusing on vegan fish-alternatives): my cousin’s wife is Thai, and her mom is an excellent, authentic Thai chef. I am a vegan and therefore don’t eat fish but when I would go over for dinner fish sauce would sometimes be the only non-vegan item in a dish – I would feel bad for turning it down … but not bad enough to eat a dish with fish sauce 🙂 So that’s when the idea really started to take hold and I began to formulate a product that used organic seaweed instead of fish which could be substituted. Also, for the record: yes, I have tried traditional fish sauce just to see what the big deal was (it has a very weird taste) … vegan Fysh™ sauce does not taste quite like traditional fish sauce but does still provide umami and that slightly funky/pungent flavor to any dish.

Tell me about how your product is made.

At first we were making very small batches but thanks to the Kickstarter we are using a co-packer to make a large production run. We use organic tamari as the base, which is naturally gluten-free, and there’s a facility just outside of Portland that produces it! We then add rice vinegar, pineapple juice, a blend of 3 kinds of powdered organic seaweed*, and just a hint of wasabi. Although the organic tamari is greatly diluted by the rice vinegar and pineapple juice, it still maintains a very dark color and the umami from the tamari is strong.

1. Dulse Palmaria Palmata Whole Leaf Dulse is soft and chewy, with a distinctive taste and a rich red color.
2. Laver Porphyra Umbilicalus, also known as “Wild Atlantic Nori,” is a wild North Atlantic cousin to Porphyra yezoensis or Nori, the seaweed grown on nets and processed into sheets for sushi. Laver has a similar sweet and nutty flavor in an unprocessed form.
3. Sea Lettuce Ulva Tactuca a species that is widely distributed along the coasts of the worlds oceans.

Besides the obvious cruelty behind current fishing practices, what are some of the negative environmental effects and how does your product eliminate both?

Besides the inhumane fishing practices that are integral to large-scale factory fish farming, the commercial fishing industry is not sustainable. Yet it seems like many people are disconnected with the process behind seafood – even when they’ve seemingly cut out other forms of meat from their diet. There’s actually a brand new non-profit, FishFeel.org that is dedicated to exclusively to fish – check them out! Organic seaweed grows quickly, provides plenty of nutrients, an ‘oceany’ flavor, and of course is cruelty-free. We hope that our vegan Fysh™ sauce is just one more tool to promote veganism and offer an alternative option for anyone who is considering going vegan, who already is vegan, or simply someone that is working to cut meat and fish from their diets. Surprisingly, though there are mock fish sauces in production, none use organic seaweed and are also not marketed to Western shoppers therefore many Americans aren’t aware of a convenient substitute to fish sauce besides basic soy sauce … we’re hoping to change that.

How can people order/buy your vegan Fysh™ sauce?

We’re excited to partner with a local Portland company, Danas Healthy Home, for online orders and there’s a link right from our home page — TofunaFysh.com.

In addition to online orders, if you live in the Pacific Northwest we are available in many grocers and are working on larger retail distributions – stores from all over the country have shown interest and we just need to further develop our distribution network to get our product to all of the stores that want it. If you have a store in mind that should carry Fysh™ sauce, please let us know 🙂 We’re also working with vegansupply.ca to ensure that Fysh™ sauce is readily available for Canadians. We are also working on food-service options so that Fysh™ sauce may be on the table at your favorite restaurants someday soon!

The winner of this giveaway is Hannah, congrats! Thanks to everyone who entered. 🙂

FOR THE SOY CURLS* 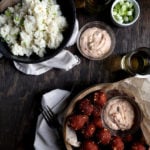