You are here: Home / Appetizers / Vegan Scallops with Pea Puree and Watercress 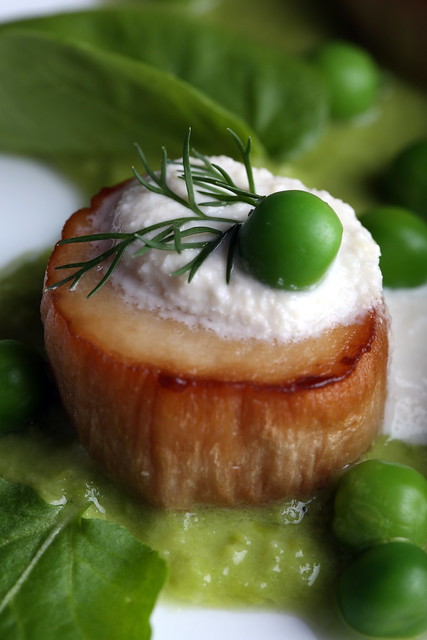 During the late 90s, I worked as a waitress at a sushi bar. My knowledge of sushi and Japanese cuisine is a compilation of facts dispensed to me by almost everyone on staff there, from the manager to the line cooks and other waitstaff, but mostly from Chef F.

Chef F. was a diminutive but imposing man, and had the ability to swing between having a fierce temper to being completely introverted and absorbed in his work to being a sort of a kind mentor—sometimes all in the span of one evening. Because of his volatile temper, I always initially approached and responded to him with extreme reservation as I felt out his current mood. One night, as I came back into the kitchen after serving octopus to some guests, Chef F. said to me, in his heavily accented English, with extreme seriousness:

The suction cups will stick to the insides of your cheek.

Instead of answering me, his serious expression morphed into a smile before he let out a good-natured laugh as I pretended to scowl at him. So when he explained to me what a scallop was a few nights later, I refused to believe him, thinking it was another one of his jokes. He then showed me where the adductor muscle was on the interior of the shell, and I remember thinking it was gross at the time, but not gross enough to stop eating them.

Although I have no idea where Chef F. is anymore, I would love to serve him these vegan scallops, and see his reaction to them. Made from king oyster mushroom stems, these are texturally and visually beautiful, and can be used in an endless array of applications. Here I’ve paired them with a garlic and wine-kissed pea puree and a rich cashew cream sauce, finishing it off with a sprig of fresh dill to help balance out all of the flavors. This is an easy and pretty appetizer to make, and would be nicely followed by a minted pea soup or a cheese-stuffed ravioli, served with crusty bread and a light white wine. 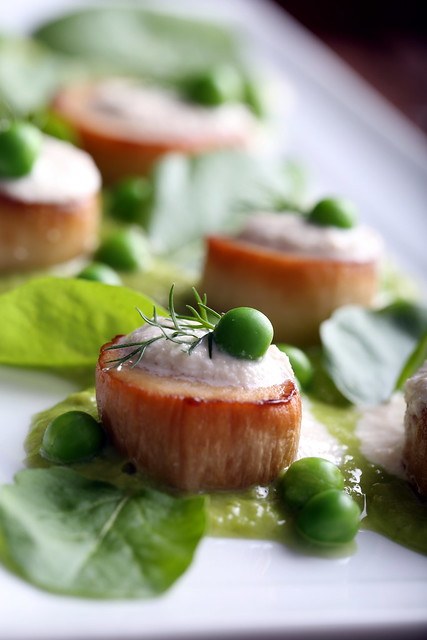 for the pea puree

for the cream sauce

for the king oyster stems

To make the pea puree

To make the cream sauce

To make the king oyster stems 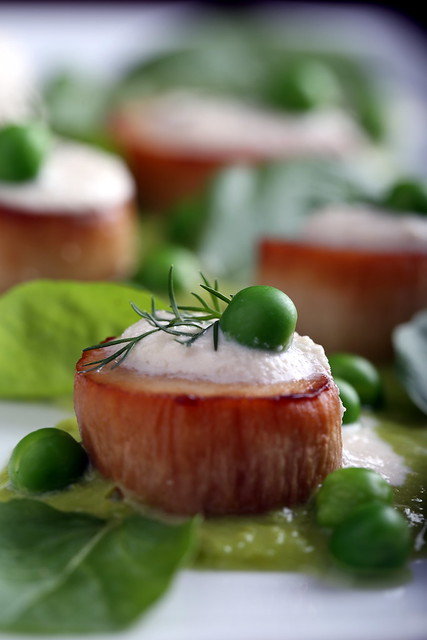 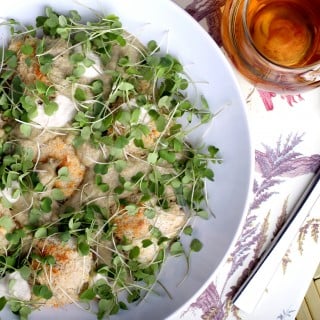