Is there anything mushrooms can’t do? If you take a look at my past mushroom-based recipes, you can see that they are a great component in vegan seafood-inspired dishes, because their texture can be easily manipulated to mimic scallops and fish. Here I’ve used king oyster mushrooms to create a dish that doesn’t really mimic any seafood-based dish in particular, but it does still have that seafood feel to it. That’s a homemade teriyaki glaze on top that’s super easy to make, without the weird ingredients you’ll find in prepared bottles of it.

This week, I also finished up a looooong post-migration web cleanup project I’ve been working on. I went through all of my 400 published blog posts and cleaned up the code and formatting, added meta descriptions + alt tags, resized photos and fixed broken links. I was a long process that I thought would never end, but I did it! Now everything is consistent. clean looking, and gives my perfectionist tendencies a little sign of relief.

Next up a little later this month is the addition of a printable recipe card. (The one I previously used on this site was doing wackadoodle stuff, so I had to uninstall, then reformat everything.) This new plugin is called Cookbook, by WP Site Care and Feast Design Co., and I have high hopes that it will make cooking from the site easier and more enjoyable for you. Stay tuned!

FOR THE TERIYAKI GLAZE

FOR THE KING OYSTER MUSHROOMS 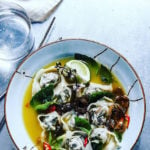